Newsletter no. 1 2015 from KMCH Support Group

Now the kids are home on winter break and the snow makes people of Humla less mobile, so we have not so many news from the area. However our project manager Lapka has been able to send us some pictures from the school home in January this year.

We continue, therefore, to tell you more from the journey to the school home last summer. In the newsletter last fall we told, among other things from the journey to the school home, about the visit at the children's school and about the inauguration of the new hostel. In this letter, we will tell you about some other activities. But first you will have some statistics about our children.

Statistics about the children in KMCH year 2014

The school in Yalwang teach up to class 10. We have two children who in the spring of 2016 will have passed class 10. If they will receive such rating that they are entitled to study further, the only possibility in Humla is in Simikot. Otherwise they must move to cities outside Humla such as Nepalgunj, Pokhara or Kathmandu. None of our children have the economic conditions so they can continue to study. It means that further studies require continued financial support.

Practice with sickles
One day we went down to the village of Yangar and then further down to the village fields at the Karnali River. From the boarding home it is roughly a 150 meter drop in altitude down to the fields which are unusually large for being in the upper Humla. Although each family's piece of land is quite small, because divisions of inheritance, it is possible to plow and harrow with yaks. This is usually very difficult on the small terraces that are more typical in Humla. On these the work is usually done completely manually.

It was time to harvest the barley, and that is done by cutting. We did the best we could to cut the barley and bind sheaves. It was hard work for our inexperienced backs so there were many breaks. After a few hours we had reaped a significant part of the field.

A couple of women - it seems that the women harvest and men plow - who started at the same time as we at the other end of the field had reaped a much larger area even though they were only two and we eight. Practice makes perfect. 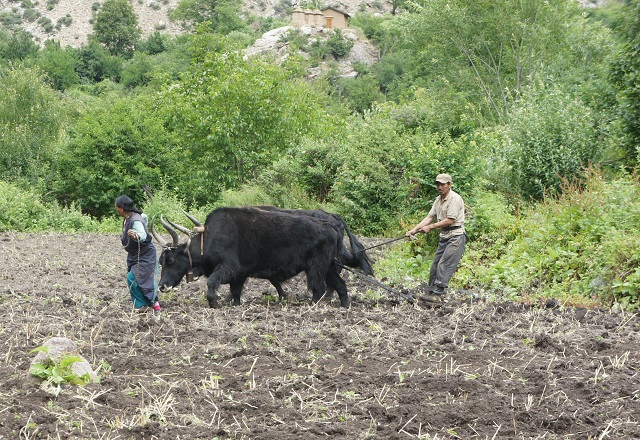 Then sheaves needed to be carried up to the village. As far as we could see that was done by the women except for what was carried by Anton and Pär. Two years ago there was threshing, as it has been done for generations, using flails on the flat roofs. There was a mobile threshing machine that the village families used jointly. This was driven by power from a mini power plant in a little river near the village. When we were there, three years ago, we didn’t see any threshing machines throughout Humla. Now there is one in almost every village.

While we harvested, adjacent fields were plowed and harrowed.  Yaks - or usually a mixture of cow and yak - pulled the plow and harrow. Both husband and wife participated. When they harrowed the woman led the yaks while the man stood behind the yaks on a wooden plate which flattened the ground before sowing.

After work we rested in the sun on the roof of Chembal’s oldest brother's house and were treated to the most delicious meal during our stay in Humla.

Picknic with the kids

On the last day of our stay in Yangar we had a picnic with the kids at a relatively flat area about a 20 minute walk from the boarding home.  A brook runs there where the kids usually go to wash themselves. We had various play equipment with us such as balls, rackets and board games. We were there all day and had both lunch and dinner there. We guests participated in games for which we had energy and interest. The children were busy all the time; if they did not play they washed themselves or their clothes. Our two free range goats followed us and stayed around all day.

The dinner consisted of momos, which is the children's favorite dish. They are dumplings with any filling.  All food is cooked on an open fire. The children made sure there was always fuel. There was a large amount of momos. It took several hours to make all these despite the fact that there were many helpers. Everything was done under the guidance of Naki and the oldest girls. This was an enormous amount of work.

Once it was time to eat, the first serving consisted of 10 pieces each. They disappeared immediately. The smallest children happily ate 15 pieces. The oldest boys ate over 40 pieces. I was probably the hungriest of us guests and had four. They tasted good, I think. The filling consisted of shredded and dried black radish fried in oil.

Nearby was the village's retirement home. The village's elderly live there together in small houses, at least in the winter when there is not so much to do in agriculture for those able to work. Chembal’s parents live there in the winter - they are in retreat - as Chembal put it. It is very calm, with a lot of prayer and meditation. The people of the village below bring up food when supplies need to be replenished. Everything is very primitive by our standards.

KMCH Support Group will have the annual meeting at Ekebyhov Castle at Ekerö on Sunday 29 March. Notice will be sent via email. You will later also be able to be read it on our website.